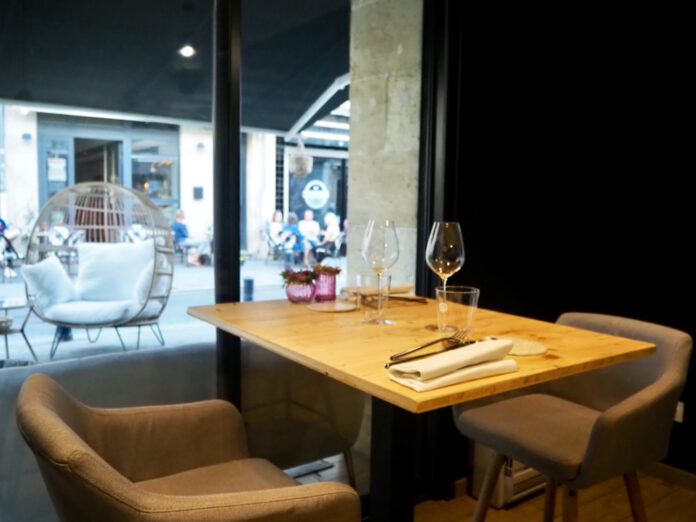 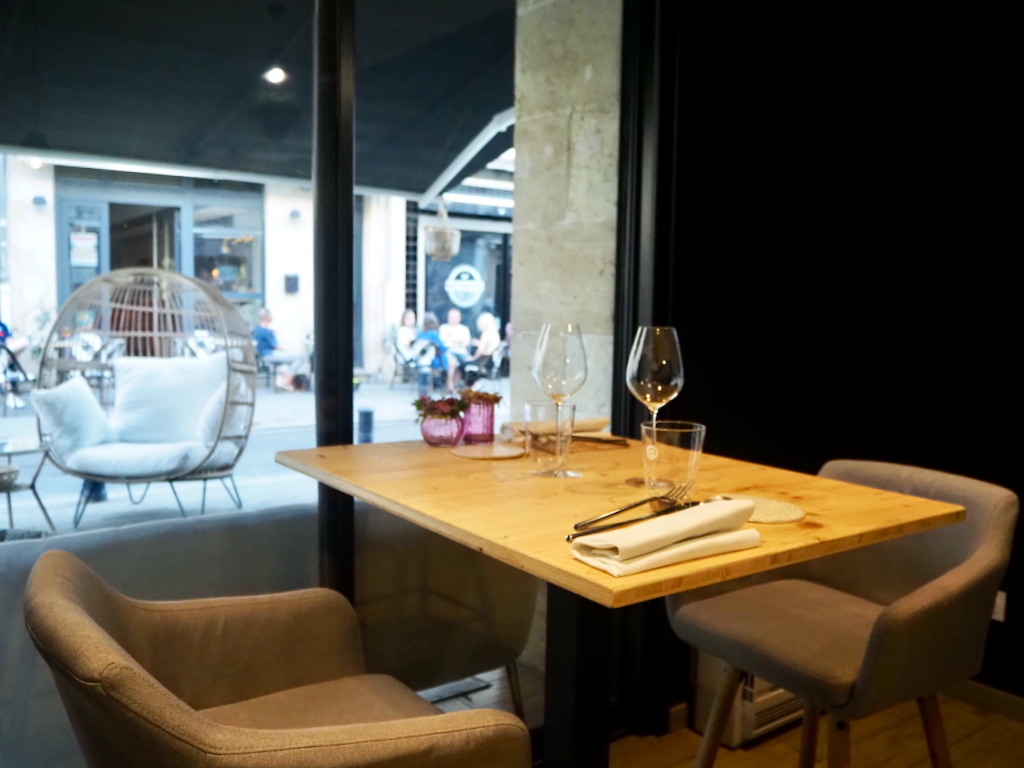 One glance around Le Cromagnon, a charming restaurant in the heart of Bordeaux, leaves one sensing its owner has a background in artistic design.

That notion is strengthened even more when innovative dishes, creatively presented, emerge from the compact open kitchen of owner-chef, Oxana Cretu. 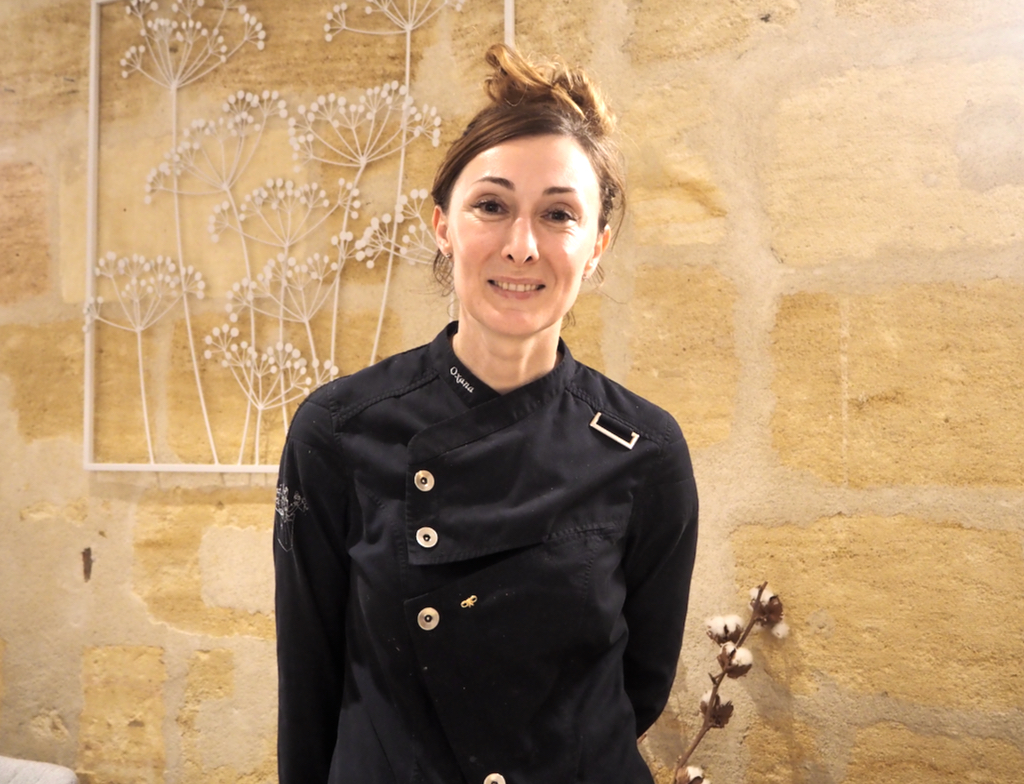 Oxana, from the Republic of Moldova who first arrived in France, aged 22 as an au pair, fuses her experience in sustainable product design with her passion for cuisine. The result: delightfully surprising combinations that satisfy both vision and taste.

Le Cromagnon (loosely translated as ‘The Caveman’) seats around 30 people and opened five years ago on rue du Palais Gallien, a stone’s throw from Place Gambetta. 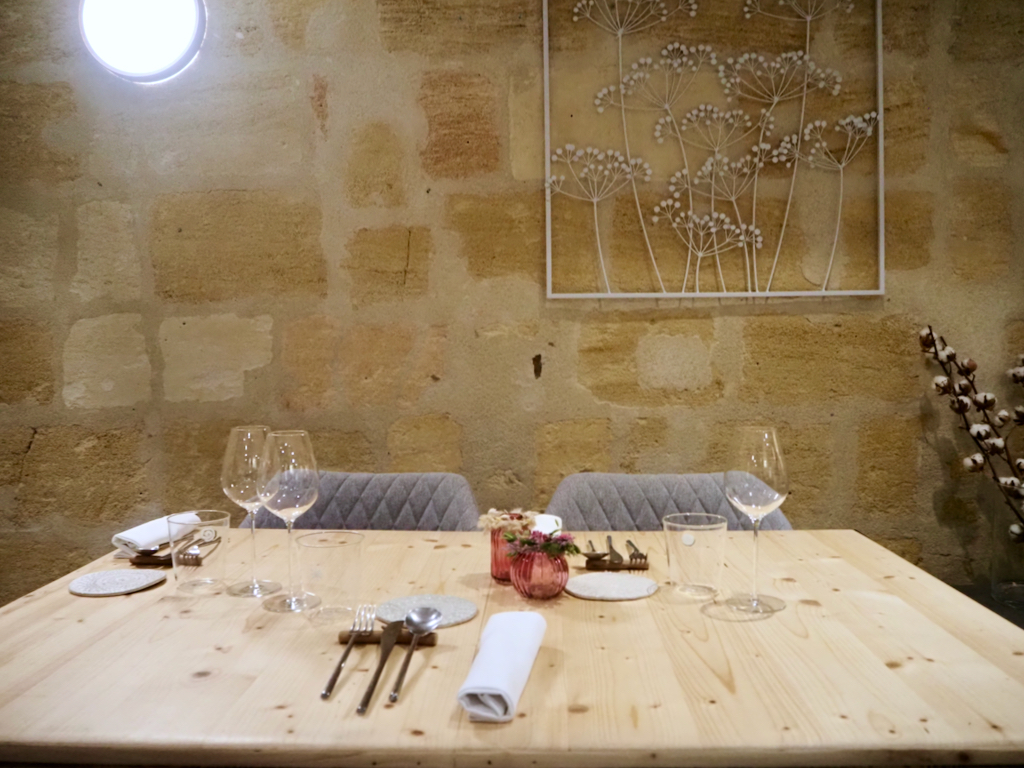 Its décor could best be described as ‘minimalist and au naturel.’ Bare wood tables subtlety decorated with dried flowers and combinations of grains and metallic wall decorations of seeding wild fennel. An exposed stone block wall and an air-conditioning vent stretching across the ceiling grant a sense of authenticity, while hints of poetry are created by pure white feathers embracing an overhead chandelier. Seating is soft, gray, armchair-style.

Varieties of teas fill jars on nearby shelves including Blue of London, an Earl Grey with bergamot; Vive le The, a green tea; and Hammam, an herbal combo of thyme, mandarin peel and rosemary. Larger jars contain exotic spices. 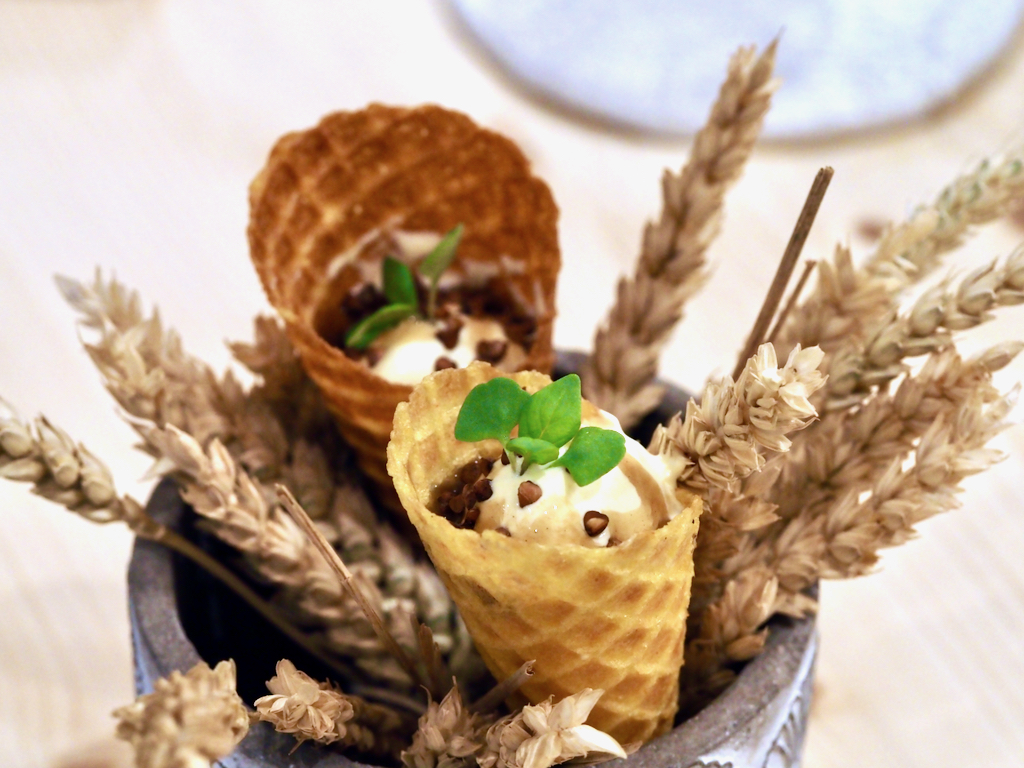 Our amuse bouche served to us by friendly and efficient Laurette, a well-traveled lady, reflected Oxana’s flair for invention. It was a savory ice-cream of caramel and corn in a cone, light and foamy with grains of the vegetable on top. 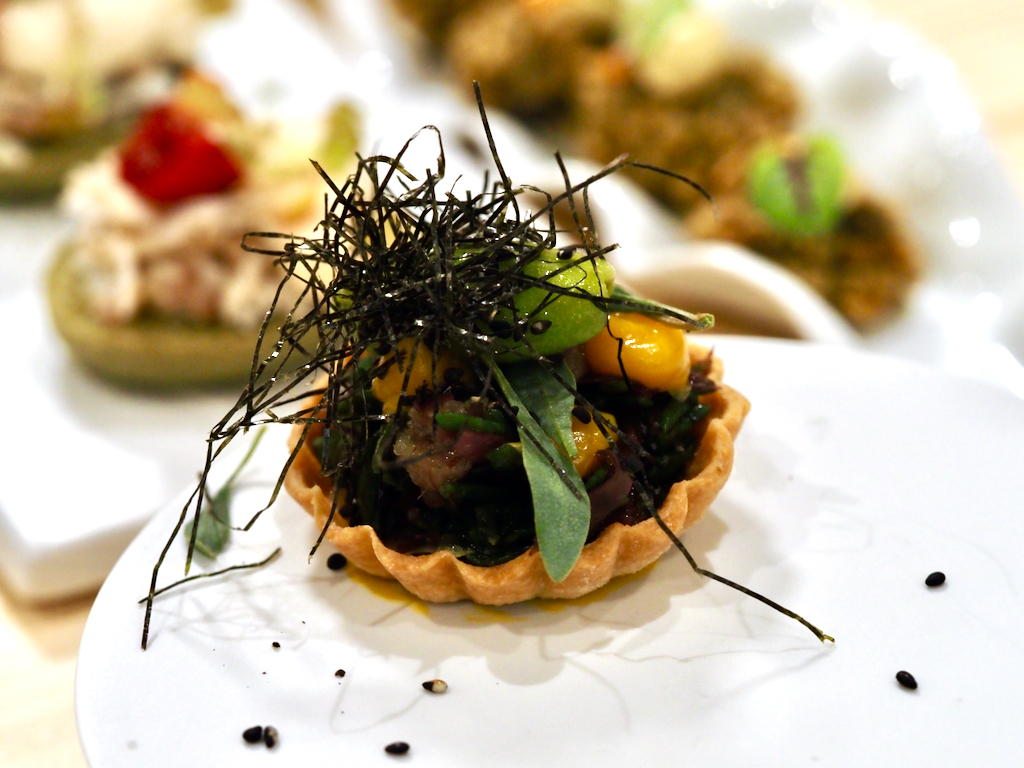 Our starters, which arrived on three stylishly-designed plates, the first shaped like a boat, the second a mini marble slab and the third, flat resting on a bowl, were equally inspired and included bao or steamed bread with shreds of crab overlaid with matcha sorbet; fried sea anemones; and homemade tart with an anchovy filling, seaweed and purselane; and ceviche of trout with eggplant and ginger, smoked with a wand of charcoal from cherry wood. As mains, we savored wedges of monkfish flavored with mushrooms and cockles in a creamy sauce followed by a mini pyramid of smoked pigeon, with Tasmania berry sauce, lightly cooked with vanilla and crunchy cashew nuts, the delectable smoky aroma wafting across the room as it was brought towards our table. 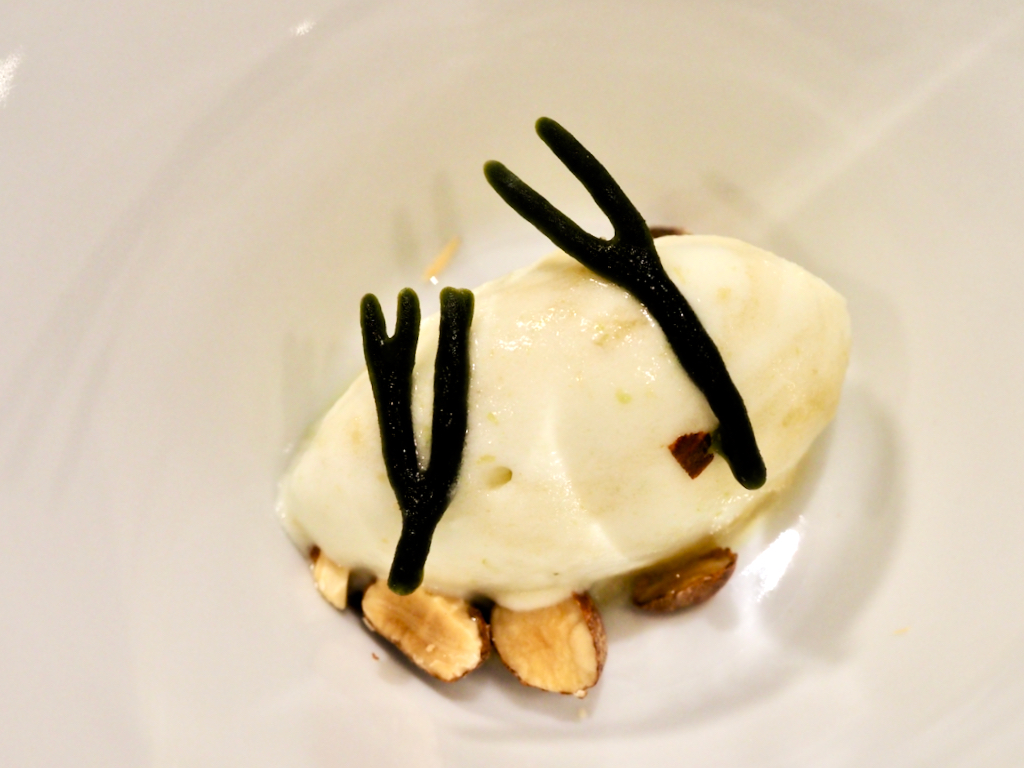 Our palate cleanser featured lemon sorbet with granita of green apple and roasted almonds, with tiny strands of seaweed for added saltiness.

Desserts – like the preceding dishes – are a work of art on a plate, our including hazelnuts layered with dollops of ice-cream decorated with sprigs of seaweed atop. 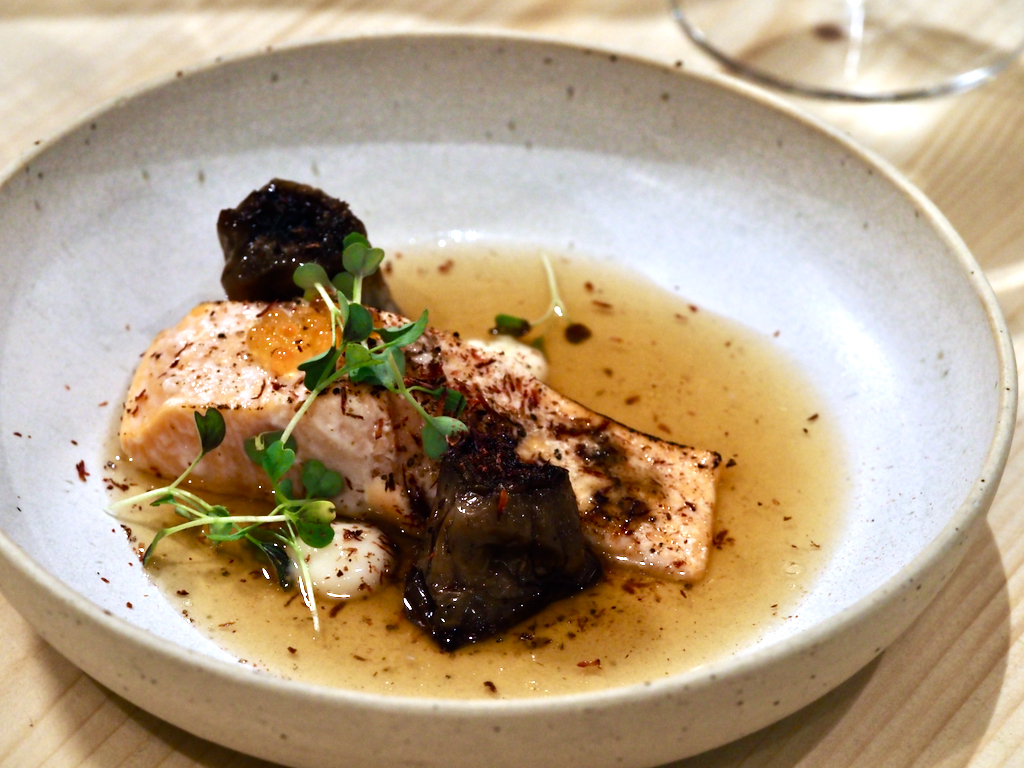 Reflecting Oxanu’s culinary imagination, on other occasions her menu has featured scallops seared in Binchotan, a Japanese charcoal made from ubamegashi oak, persimmon marmalade and jelly, Sturia caviar and Thai broth; celery and shiitake risotto and shellfish; and pigeon fillet, cashew hummus and smoked almonds, shiso and umebushi (Japanese plum).

Oxana has devoted much time sourcing quality produce before choosing reliable suppliers, thus her vegetables are provided by Frédérique Amy-Develay in southwest France while citrus fruits are from Damien Blasco in the eastern Pyrenees. 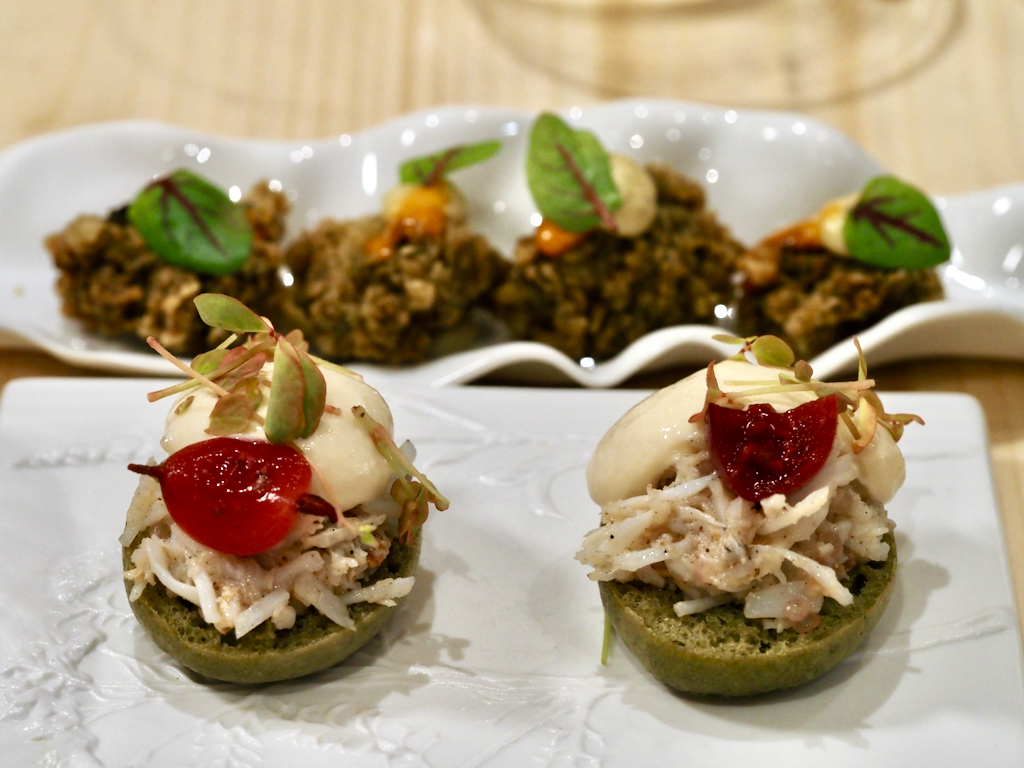 A visit to Le Cromagnon is also a chance to taste some excellent and lesser known wines from countries such as the Czech Republic, as well as classics from France, Australia, Argentina and Italy. Even more interesting, are vintages chosen by Oxana from her native country. We opted for Fautor Aurore Feteasca Regala, a ‘royal wine’ from Moldova, pale yellow in color with greenish reflections, with jasmine, floral and citrus notes.

Oxama offers both five and seven-course tasting menus and in my opinion, the quality of the food and its intricately-designed presentation elevates her restaurant to Michelin-star level, a recognition I’m sure she will receive soon enough.