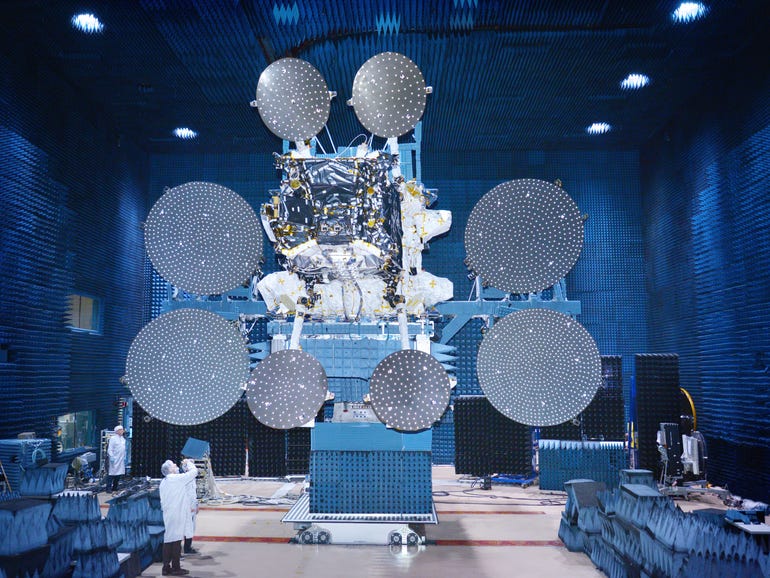 The company responsible for the National Broadband Network has detailed to Senate Estimates how 46,500 of its 112,000 satellite customer base were knocked offline, as well as how 600 of those customers remained offline for the next fortnight.

Speaking on Tuesday night, NBN chief development officer for regional and remote Gavin Williams said the incident was not the company’s finest hour, but it was “unprecedented”.

Williams said at 8:30pm on December 21, Sky Muster manager Optus informed NBN it had an “off-orbit condition of our second satellite,” due to a micrometeorite hitting it.

“It effectively makes the satellite’s body rotate whilst it remains in its orbit. So the satellite is no longer pointing at the appropriate spot on earth. So the payload, the transmission system on that satellite, is effectively switched off for that period,” he said.

Seven hours later, the satellite refound Earth and recovered, and service resumed for all but 573 customers. For them, the outage was just getting started.

Williams said in that instance, the outage was due to missing parameters in a configuration file used in customer premises equipment.

“It took quite a long time actually to delve into what was wrong and how you could recover,” he said.

“In the meantime, we had a few theories, we were mobilising people off of annual leave to potentially do 600 truck rolls into the bush. Fortunately, we were able to recover with effectively manual intervention.”

Although he could not say with total certainty, Williams said a load balancer is believed to be the root cause, and NBN is working with its suppliers to ensure it doesn’t happen again. In the meantime, NBN is armed with emergency patches and workarounds if it sees the issue again.

Elsewhere in the hearing, NBN said it was on track to launch its FttN upgrade ordering next month, as planned, but the looming election could hit the fibre to the curb upgrade launch that the company had told retailers would arrive in early May. Pretty much exactly when the next federal election is expected to be.

“That’s something we actually need to consider as to whether it’s something we should do or not during a caretaker period, to be honest with you,” NBN CEO Stephen Rue told Estimates.

“I want to get FttN launched first and then we need to think about whether that’s something we should do during [the caretaker period].”

Rue added the company was seeking advice on its caretaker obligations and it would then make a decision on the launch date.

The CEO also said NBN has one million FttN premises in the design stage for the upgrade, and 540,000 in the build phase, however, it would only launch sales with 50,000 premises. The cost of the new fibre lead-in is expected to be under AU$1,500, with NBN levying a AU$200 charge on retailers if users order a service that needs a fibre line, and seek to downgrade within the first year.

In late June or early July, NBN will be deploying a fair use policy for fixed wireless users that will see them get reduced speeds for certain traffic classes.

If a customer surpasses 400GB in downloads or 120GB in uploads for a month, the user will be flagged for the subsequent month. During that time, video streaming would be capped at 14Mbps, file sharing would be 1Mbps either way, software downloads would be 3Mbps, and game downloads would receive 5Mbps in capacity.

“We felt that for a fixed wireless customers. It’s a prudent way of managing customer experience to get the best for our customers.”

On Monday, the Regional Telecommunications Review was published and deemed the 6Mbps fixed wireless upload speeds as unreasonable.

“We suggest this 6Mbps target and other speed targets need to be significantly strengthened as demand continues to increase and pressure on the network grows. This is particularly important for upload performance,” the report said.

“NBN Co has recently introduced Fixed Wireless Plus plans, which are delivering increased download speeds on the network. However, the committee has heard that upload speeds on these plans have been reduced from an initial 20Mbps to just 10Mbps.

“This is insufficient for many of the activities higher-bandwidth users are looking to use the service for and inconsistent with the upload speeds available to fixed line consumers.”

Earlier on Tuesday, deputy secretary at the Department of Infrastructure, Transport, Regional Development and Communications Richard Windeyer said according to reports he had seen from NBN, the fixed wireless network was “holding up very well” and “considerably above the minimum design threshold”.