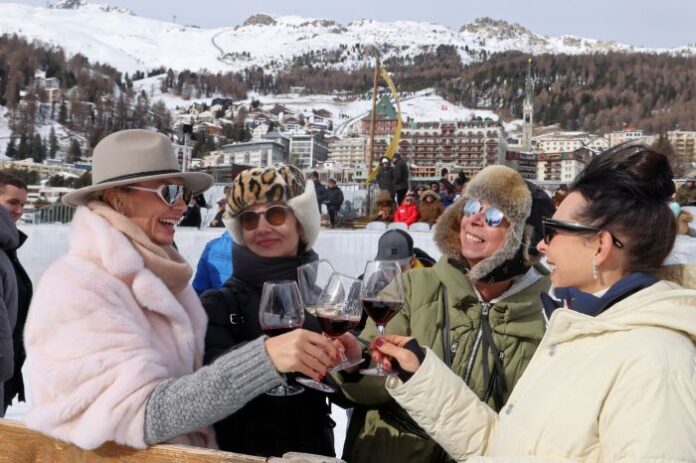 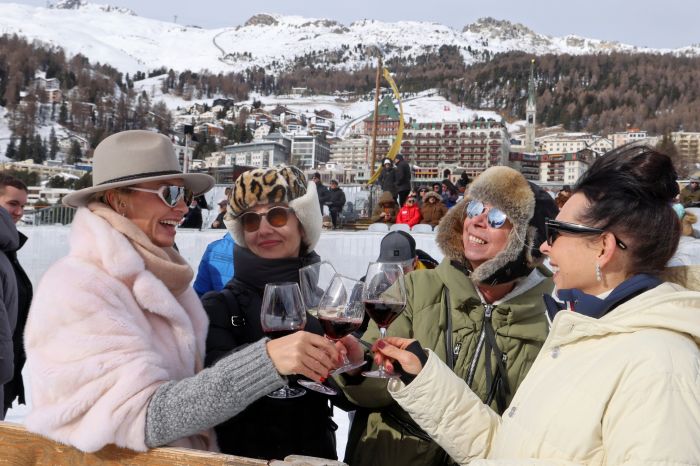 It’s unlike anything you’ve ever seen before. There is an electricity in the air as the pistol blasts and, in a flash, the mighty horses blast through the gates but without a saddle or rider on top. You can’t exactly call them riders as the horsemen are five feet behind and on skis as the horses gallop around the track at blistering 35 miles per hour. All of this to the delight of throngs of well-to-do spectators, each dressed in haute fashion and designer winterwear, appearing as if they’ve just walked off the runway.  Throughout the day guests vacillate between taking in the equine action on the frozen lake and sipping champs and noshing on gourmet nibbles. This is the White Turf and arguably the most exciting and posh winter event in the world. 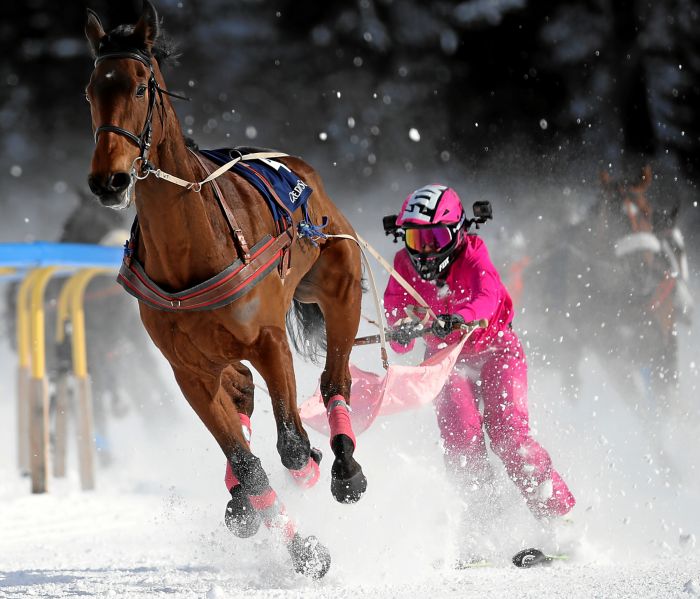 The White Turf is literally a big deal. It is one of the richest horse races in Europe and one of the top equine events in the world on par with the Kentucky Derby, Melbourne Cup, Dubai World Cup, and the Royal Ascot. Betting is a serious matter during the race where fans plunk down their Swiss francs for a chance to win part of half-million CHF and the highest prize money in Switzerland. 20 races are set on the frozen lake and take place over three weekends in February. The snow-covered track is serenely quiet until the thundering thoroughbreds wiz past in disciplines that include harness racing, traditional races, chariot races as well as the star of the festival, skijoring. 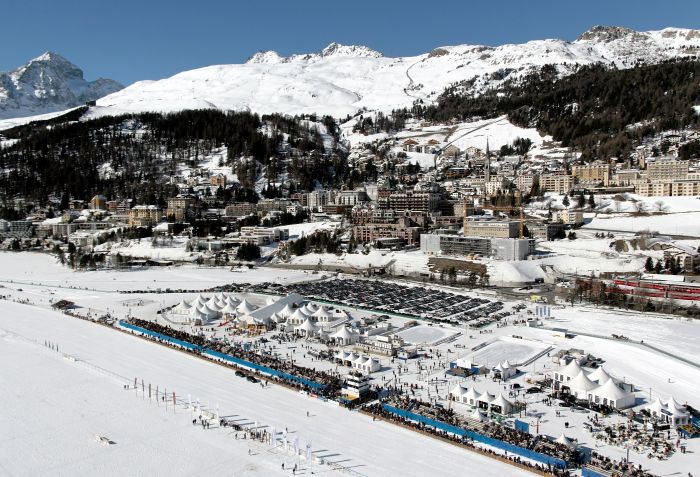 The setting could not be more beautiful with the prodigious Engadin mountains as the backdrop for the 35,000 visitors who descend on St. Moritz for this unmissable high society event. The White Turf is a winter carnival in a 32-acre pop-up village of cafes, live music, vendors, and of course, VIP exclusive access areas catering to the privileged class. 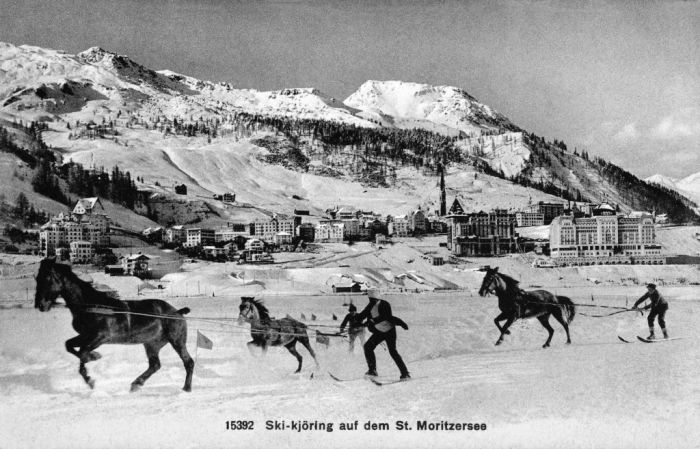 Rumor has it that at the turn of the last century when, after one too many G&Ts, several British tourists went out on the frozen lake and challenged each other to a race behind horses while on skis. It was 1906 and the start of skijoring and the White Turf a year later. The Swiss know how to make the most of the winter and enjoy the outdoors no matter what the temperature. Throughout the winter season, events take place on this frozen tundra including the St. Moritz Snow Polo and Cricket on Ice. 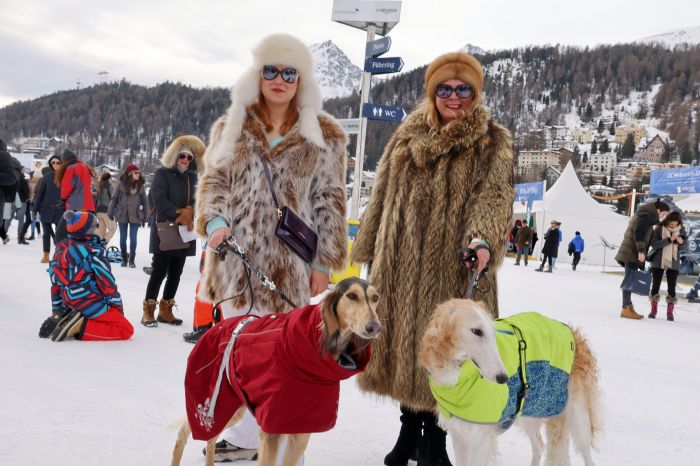 The White Turf draws elites from around the world for the races but also the uber glamorous atmosphere. This is a must on the annual social calendar for the jet-set and beau monde who arrive by private jet, chauffeured car, or through the enchanting Swiss Alps by train on the Glacier Express, Excellence Class, of course.  Behind the velvet rope of the VIP area is an elevated experience to be had in the decked-out tents where the elite retreat for gourmet cuisine, Laurent-Perrier and a haven in between races to escape the cold. When it is time for the action, there is a private platform with special viewing areas just for these catered-to guests. Event sponsors such as Credit Suisse entertain their best clients in their own exclusive and private tents. 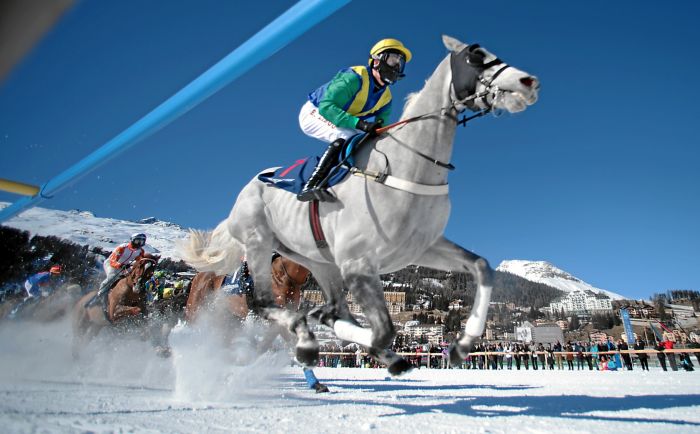 The 20 races showcase top thoroughbred horses with skilled jockeys from around the world who compete for fame and fortune. No matter the race, it is a thrillfest with a pot of golf for the winner. Race after race, these fine animals blaze down the track, and those close to the action will not soon forget the distinguishable sound as these beasts literally thunder past on the 3,000-yard course as clumps of snow create a blizzard in their wake. 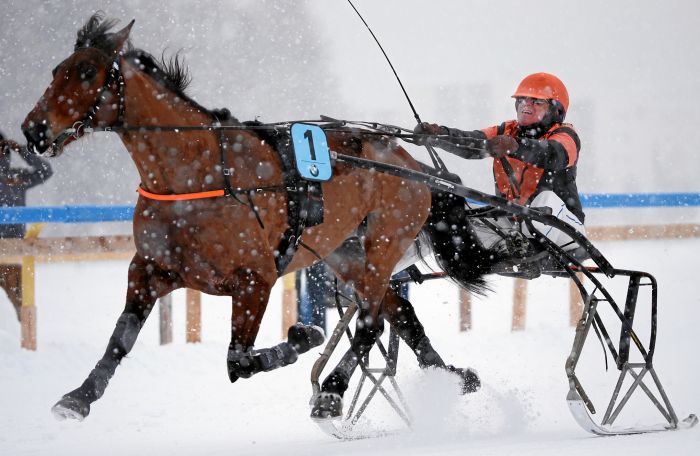 There’s always something exciting to watch in the various races. The trotters or harness races are just as exciting as you’d see at Belmont but in this case, they are not on wheels but skis and race for 1900 yards. Later the flat races or traditional races are where the big prize money is won and you’ll see lines of patrons cueing in the tent village to place their bets. 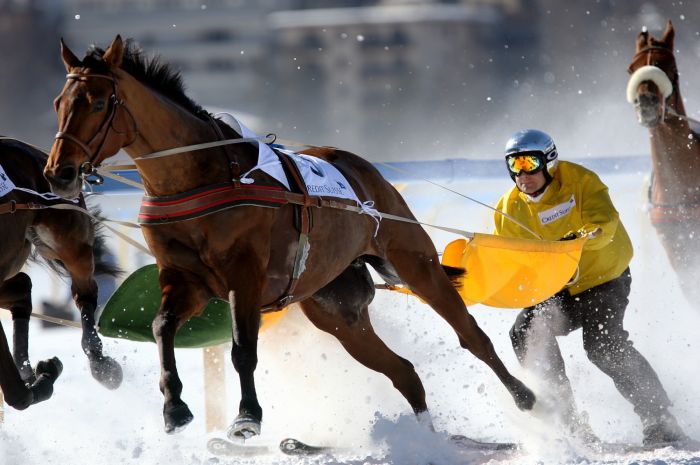 The most thrilling race is undoubtedly skijoring. What makes it so fascinating is that it is of course quite unusual but also that the horsemen must exhibit such horsemanship and skiing skills as well as a copious reserve of bravery as they speed around the 3000-yard track behind these powerful thoroughbreds. One wrong move and the horsemen will be sent careening off the track or crash into other horsemen and, at speeds of 35 mph, will most likely only win an extended stay at the hospital. Riders compete in each of the three weekends and amass points for the winner with the highest total who is then named the “King of the Engadine”. 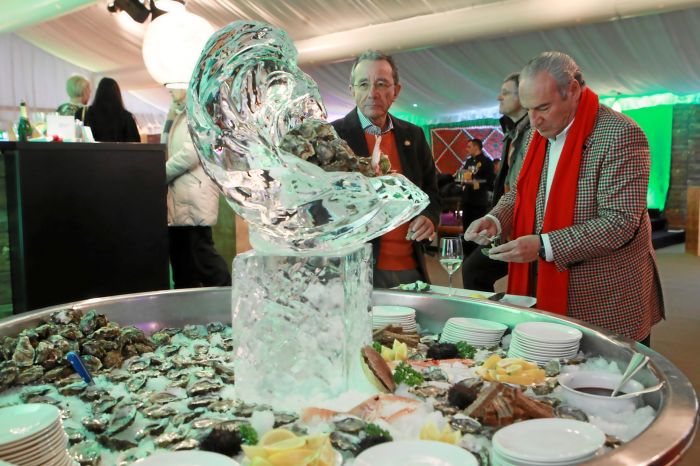 In between the races, the well-to-do set visit the pop-up village with tents offering everything from private jets, luxury cars, winter fashion, and souvenirs.  For those without access to the VIP area, there’s also plenty of posh noshing to be had from vendors such as DaVino offering the best Riesling and pinot noirs from Switzerland with other fine international wines on offer. 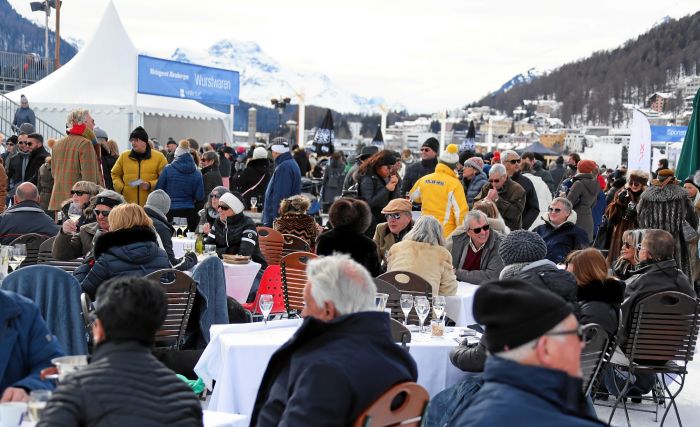 Elsewhere pop-up restaurants offer haute cuisine with alfresco dining areas where the visitors take in the sun in between their champagne and oysters. To add to the ambiance, festive live music gets the revelers dancing and singing along. 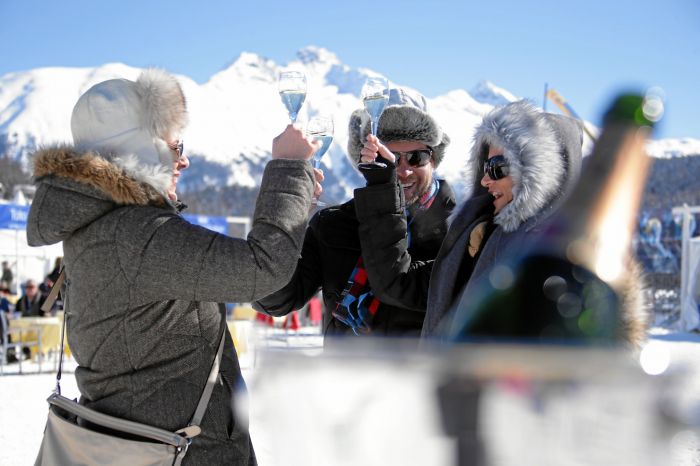 The White Turf is a one-of-a-kind special event. From the glitz and glamour of St Moritz to the thrill of the action on and off the track, it is Switzerland’s ultimate unmissable high society event.