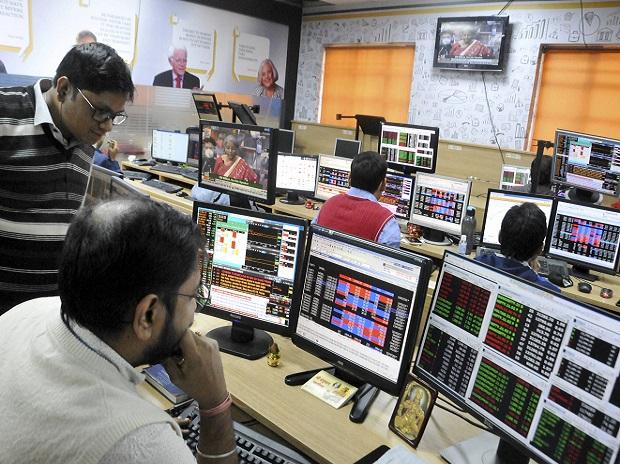 LIVE market updates: The headline indices extended losses in morning deals in a volatile market. The BSE Sensex was down 343 points at 57,798, while the NSE Nifty was at 17,267, lower by 85 points.

On the Sensex, 25 stocks were in the red zone, with losses in ICICI Bank, RIL, HDFC Bank, L&T, SBI and Infosys, trading 0.5-1.5 per cent. On the Nifty, Eicher Motors was the additonal loser.

Sectorally, Nifty Bank, IT, FMCG were in the negative territory, whereas, realty index continued to trade 1 per cent higher. Nifty Auto and Financials were now muted.

In the broader markets, the BSE MidCap and SmallCap indices continued to outperform the benchmarks and were trading 0.15 per cent and 0.6 per cent higher, respectively.

New listing: Vedant Fashions, the owner of ethnic wear brand Manyavar, made a good stock market debut on Wednesday, with shares of the company getting listed at Rs 936, an 8 per cent premium over its issue price of Rs 866 per share on the BSE. On the National Stock Exchange (NSE), the stock opened at Rs 935 per share. READ DETAILED REPORT HERE

This apart, shares of Va Tech Wabag surged 16 per cent to Rs 342 on the NSE on the back of heavy volumes on strong order book position of over Rs 10,000 crore.The company, a leading Indian multinational company in the water sector, said it has a order book of Rs 10,067 crore including framework contracts and have 3x revenue visibility. The nine month (April-December) order intake was of Rs 2,832 crore. READ MORE


LIVE market updates: The benchmark indices turned choppy in early morning trades after they started on a higher note. The BSE Sensex was down 67 points at 58,074, and the NSE Nifty was at 17,342, lower by 10 points.


On the Sensex, M&M was the top gainer, up 2 per cent, followed by financial counters–HDFC, Kotak Bank and Bajaj Finserv. ITC, Dr Reddy’s, Bajaj Finance, HCL Tech, TCS and HUL were the other gainers.

On the other hand, L&T and Tata Steel were the top laggards, down up to 1.5 per cent. Other losers included SBI, ICICI Bank, Shree Cement, Wipro and Ultratech Cement, all trading 0.8-0.9 per cent lower.

The broader markets were, however, outperforming the benchmarks and were firmly in the green zone. The BSE MidCap index was up 0.3 per cent, while the SmallCap index was 0.7 per cent higher.

Sectorally, Nifty Bank, Metals, and IT slipped into the negative territory and were the top losers now. Nifty Realty, meanwhile was the top outlier, up 1.5 per cent.

Nifty Financial Services index was another gainer. From this pack, NBFC stocks were firmly higher after the Reserve Bank of India (RBI) gave the entities additional time till September 30, 2022 to implement the new NPA rule wherein bad loans can be upgraded as ‘standard’ asset only when entire arrears of interest and principal are paid. The earlier deadline was March 31, 2022.

However, the indices soon after the opening were seen turning volatile as they slipped into the red zone.


In the broader markets, the BSE MidCap and SmallCap indices were also in the positive territory, higher up to 1 per cent.

Sectorally, the Nifty Realty index was leading the gains, up 1.3 per cent, followed by Nifty Oil & Gas index, trading 0.8 per cent up and then Nifty Auto and Financial Services, both 0.7 per cent higher.

LIVE market updates: The key benchmark indices are likely to start trade on a muted note as indicated by trends of the SGX Nifty futures, which were quoting 17,380 levels this morning, higher by 20-odd points as compared to Nifty’s spot close the previous day.

On Tuesday, the markets had recovered in a sharp rally after reports of Russian troops heading back to their bases from the Ukranian border brought respite to jittery invetsor sentiment. The Sensex and Nifty benchmarks ended 3 per cent higher each.

Among stocks today, Vedant Fashions is set to make its debut. The final issue price has been fixed at Rs 866 per share. It would be third listing in year 2022 after AGS Transact Technologies and Adani Wilmar. The IPO had received a tepid response from investors getting subscriptions of 2.57 times whereas its retail portion was subscribed only 0.39 times.

This apart, Tech Mahindra may also be eyed as the company will acquire 80 per cent equity shares in Geomatic.ai for a consideration of A$6m.

Burger King India will also be in focus as the company has closed its qualified institutional placement issue and finalised the issue price at Rs 129.25 per share, a discount of 5 per cent to the floor price of Rs 136.05 per share.


Overnight the US markets logged smart gains amid signs of de-escalating tensions along the Russia-Ukraine border. The Dow Jones rose 1.2 per cent, the S&P 500 gained 1.6 per cent and the Nasdaq rallied 2.5 per cent.


Major markets in Asia were up smartly in early deals on Wednesday. Japan’s Nikkei surged nearly 2 per cent. Kospi and Taiwan gained 1.5 per cent and 1.3 per cent, respectively. Hang Seng advanced 0.8 per cent, while Shanghai added 0.4 per cent. Straits Times, however, was down 0.3 per cent.